Colorado is the Rocky Mountain State for good reason: it is home to some of the tallest peaks in the country. In fact, Colorado has more peaks higher than 14,000 feet than any other state in the U.S., and all but a few of these are on National Forests. More than 260,000 people climb Colorado’s Fourteeners each year.

Just over an hour outside of Denver, the Stevens Gulch Trail to Grays and Torreys Peaks, on the Arapaho - Roosevelt National Forest, is often flooded with visitors and residents trying to summit their first Colorado Fourteener. The trail is also popular for people looking to experience the alpine; hikers receive a quick reward with spectacular views soon after starting to hike.

Grays and Torreys are the only two Fourteeners situated on the Continental Divide, and hiking both peaks one of the most popular 14er hikes in Colorado due to its proximity to Denver and the Front Range. An estimated 25,000-30,000 people visit the summit trail annually, giving the Steven’s Gulch Trail the distinction as the second-most visited Fourteener summit trail in Colorado.

All of the use, however, has led to major degradation. The trail needs to be reconstructed to alleviate degradation associated with trail braiding, erosion, and extensive resource damage occurring above 13,000. To create a more sustainable, durable trail, with REI’s support, the NFF and partners are preparing in 2019 to launch a 3-year effort to reconstruct the popular Steven’s Gulch Trail. 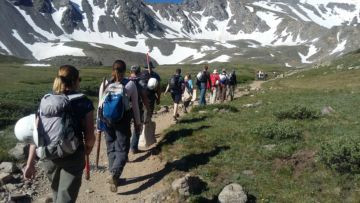 This project will enhance access to Grays and Torreys Peaks, delineate the trail so that it’s easier for hikers to follow, and by keeping hikers on the more sustainable trail, the project will help protect the alpine habitat that sustains fragile plants and wildlife. Professional trail crews will focus on rehabilitating the upper stretches of trail (above 13,000-feet), while volunteer crews will focus on the lower areas of the mountain where reducing erosion and helping to remove user-created ‘rogue’ trails will be key.

Through the NFF’s Find Your Fourteener Campaign, which has received extensive multi-year support from REI through the REI-Co-op MasterCard partnership, we are increasing the pace and scale of trail improvements and ecological restoration on Colorado’s highest peaks. The NFF is building partnerships, working to increase local capacity and get more skilled crews and trained volunteers on the ground. By building these cohesive partnerships, we’re expanding the on-the-ground accomplishments, and addressing priority needs on Colorado’s beloved Fourteeners.

Learn about the REI Co-op Mastercard® 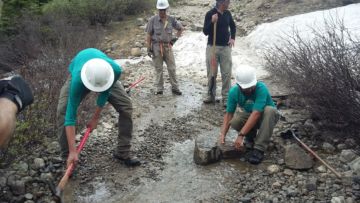