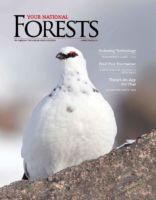 Standing about six inches tall, the Clark’s Nutcracker spends its day foraging in the canopies of whitebark pine trees. Diligently hopping from branch to branch, the grey and black bird uses its specialized beak to extract the nutritious seeds from the tree’s large cones.

Once it has filled a special carrying pouch in its neck, the Clark’s Nutcracker flits down to the forest floor and stores the seeds in a cache buried about an inch underground. The whitebark pines, meanwhile, sway gently in the high mountain air, unperturbed by the bird’s antics.

Having co-evolved together over thousands of years, these two species now enjoy a symbiotic relationship: the Nutcracker gains valuable calories in an otherwise food-barren landscape, while the pines’ seeds are dispersed and “planted” by the bird. Over the course of a year, a single Clark’s Nutcracker can cache an amazing 100,000 whitebark seeds.

The bird will recover the majority of these caches, but many will remain in the ground. Buried at the perfect depth, the forgotten seeds are the sole means of establishment for the slow-growing whitebark pine. While this relationship has allowed the whitebark to regenerate for millennia, the Clark’s Nutcracker’s busy, if forgetful, behavior may not be enough to ensure the tree’s survival in an uncertain future.

Well known for its importance as a keystone species in western subalpine environments, the whitebark pine is declining perilously across most of its range. This quick and precipitous change—as much as 90 percent in some ranges—represents the loss of an entire generation of the species, which provides food for nearly 150 other types of wildlife beyond the Clark’s Nutcracker.

Whitebark pines have been impacted by fire suppression, mountain pine beetle and a pathogenic fungus called white pine blister rust. The white pine blister rust, an invasive fungal disease from Europe, has spread so rapidly that many of the most vital high elevation whitebark pine forests have been reduced to “ghost forests” of standing dead trees. Fortunately, even amid stands that are dead or dying, there are occasional survivors—healthy trees that show a stubborn resistance to the invasive disease.

Flathead National Forest Silviculturist Melissa Jenkins keeps tabs on these rare disease-resistant trees in a remote corner of Northwestern Montana. Referred to as “plus trees,” these survivors have withstood the spread of white pine blister rust, suggesting a genetic resistance to the pathogen. Knowing these trees hold the key to the species’ survival, Jenkins and her Forest Service colleagues are using these plus trees to implement innovative restoration strategies they hope will save the beleaguered species.

The 2009 Skyland Fire burned thousands of acres of the Flathead National Forest near the Continental Divide. Standing amidst subalpine shrubs and grasses, Jenkins points out young whitebark pine seedlings that were planted three months ago, part of an NFF-sponsored tree-planting project. Fires like these, she explains, create ideal conditions for the seedlings, which are carefully hand planted by professional tree-planting crews. The special care is merited; these seedlings are the products of an intensive, two-years-long regeneration process.

First, Jenkins and her colleagues collect seed-bearing cones from the plus trees she has recorded in a database. Second, the seeds are mechanically extracted from their cones and transported to a state-of-the-art Forest Service nursery in Coeur d’Alene, Idaho. Nursery staff grow them for two years in a climate-controlled environment to increase their hardiness— a must if they’re to survive in their harsh subalpine environment. Finally, once they are a few inches tall, they are planted back in their home forest.

The twenty-five thousand seedlings planted at the Skyland Fire site represent an important first step in whitebark pine restoration. While they’re not guaranteed to be “rust-resistant,” their genetics should give them a leg up in the battle against the pathogen. But Jenkins and her team aren’t banking solely on this presumed resistance; they’re combining age-old horticulture techniques with modern innovations to produce a quantity of rust-resistant seeds at a pace nature simply can’t match.

Given whitebark pine’s slow growth rate and limited ability to propagate, Jenkins acknowledges she may not even be around to see cones from her planting efforts in her lifetime. “Mature whitebark pine trees typically don’t produce cones until they are least 50 years old,” Jenkins explains. “It’s great that we’re planting these seedlings with higher levels of rust resistance, but those trees aren’t going to produce seeds with improved rust resistance for five decades.”

For a species that’s losing its race against time, 50 years is too long to wait.

Fortunately, there is a plan to speed up this natural process. While most of the whitebark seedlings grown at the Coeur d’ Alene nursery are planted on sites like the Skyland Fire, some are kept at the nursery and exposed to dense concentrations of the blister rust fungus. Silvicultural experts then transfer the exposed seedlings into climate-controlled monitoring plots where they stay for five= years. Just like generations of farmers have done with agricultural diseases, the silviculturists then select the seedlings that show the greatest resistance to the pathogen for the next step of the process.

Staff first collect “scion” material, a small portion of a cone-bearing branch, from the top of a mother plus tree. This branch, which still “thinks” it is located high on a mature tree, is then grafted onto the rootstock of the five-year-old whitebark pines that have proven their resistance to blister rust.

Once the cone-bearing scion material is successfully grafted, the new trees are moved to an outdoor seed orchard located on the nearby Lolo National Forest. By combining this grafting technique—a centuries-old method popularized by apple growers—with the selective breeding program that produces the most rust-resistant rootstock, these orchard trees will produce truly rust-resistant pine cones well in advance of the typical whitebark pine life cycle.

When the seed orchard was established using this technique in 2009, the timeline for success was unknown. Whitebark pine is a slow growing species, so Jenkins expected that it could take as much as= a decade for the grafted trees to bear cones. But, thankfully for the fate of whitebark pines, Jenkins observed a “conelet” on a young tree just a year after grafting.

The process is working, shaving roughly 45 years off of nature’s timeline. Soon, rather than sending tree climbers into remote, high-elevation forests to collect seeds from plus trees that show some natural rust resistance, silviculturists like Jenkins can harvest cones from the orchard with full confidence that their seeds are equipped to withstand blister rust. This horticultural sleight of hand is making the future of whitebark pines a lot brighter that it was a decade ago.

No doubt, the Clark’s Nutcracker would sing its appreciation if only its throat wasn’t full of seeds.