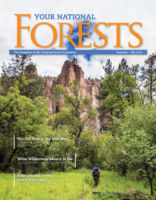 Years before the Gila Wilderness existed on a map, Aldo Leopold shot a wolf from atop a rimrock canyon in New Mexico. He reached the still breathing wolf and saw something that forever changed him. In his classic text, A Sand County Almanac, Leopold describes the experience, “We reached the old wolf in time to watch a fierce green fire dying in her eyes.”

“I realized then, and have known ever since, that there was something new to me in those eyes—something known only to her and to the mountain. I was young then, and full of trigger-itch; I thought that because fewer wolves meant more deer, that no wolves would mean hunters’ paradise. But after seeing the green fire die, I sensed that neither the wolf nor the mountain agreed with such a view.”

The year was 1912—the same year New Mexico was annexed from Territory to statehood—and Leopold was only 24-years old. With his round-frame glasses and tobacco pipe, he looked more like a naturalist professor than a trigger-happy hunter. He grew up sketching fawns and flowers along the banks of the Mississippi River in his boyhood home of Burlington, Iowa. He had earned a degree from the Yale School of Forestry before the U.S. Forest Service appointed him Supervisor of the Carson National Forest in New Mexico. “In those days,” Leopold said, “we had never heard of passing up a chance to kill a wolf.”

On June 3rd, 1924, the Forest Service accepted Leopold’s proposal and set aside more than 500,000-acres of mountains, rivers, and desert surrounding the Gila River. It became the first federally-recognized Wilderness area in the country, and it would serve as a model for wilderness preservation to come.

Leopold’s boss, Gifford Pinchot, the first chief of the nascent Forest Service, instructed his agency to manage its vast natural resources for the betterment of mankind. Leopold shared this opinion at first, but as he traveled by horseback through his nearly 500,000-acre jurisdiction, the conservationist began to have ideas of his own. The wolf-killing policy, for instance, he likened to sharpening the pruning shears of God, because plants in wolf-less regions were grazed to the ground by deer and cattle. It dawned on him that healthy ecosystems required biodiversity, wolves and all. He called the concept “thinking like a mountain.” And after watching the fire fade in the dying wolf’s eyes, he believed that sometimes the natural world would be most wisely managed if mankind simply left it alone.

Leopold thought the Gila (Hee-la) River landscape in southwestern New Mexico made a prime candidate for wilderness preservation. His tenure at the Carson National Forest had provided him ample opportunity to know the area intimately. He liked how the Mogollon Mountains, the peaks of the Black Range, and the San Francisco Mountains all converged with the Chihuahuan and Sonoran Deserts to create a topographic fortress against the pioneers’ axe or plow.

A place where ecological worlds collide, the Gila captivated Leopold. The pinyon-juniper woodlands of the Mexican desert mingle with the spruce-fir forests of the Rocky Mountains. Aspen trees and prickly pear cacti, herds of elk and elusive Gila monsters, rattlesnakes and white-nosed coatis, wolf packs and javalinas all haunt the Gila as they did in Leopold’s day. In a single river bend, you can hook a catfish on one cast and the endemic Gila trout on another.

When cattle ranchers proposed a road to improve grazing access into the undeveloped core of the headwaters in 1921, Leopold penned an article to the Journal of Forestry asserting America’s need for wilderness. He argued for “a continuous stretch of country preserved in its natural state.” He also wrote a wilderness proposal and mailed it to his superiors in Washington, D.C.

On June 3rd, 1924, the Forest Service accepted Leopold’s proposal and set aside more than 500,000-acres of mountains, rivers, and desert surrounding the Gila River. It became the first federally-recognized Wilderness area in the country, and it would serve as a model for wilderness preservation to come.

Forty years later, on September 3rd 1964, Secretary of the Interior Stewart Udall, Idaho Senator Frank Church, and other dignitaries gathered around President Lyndon B. Johnson in the White House Rose Garden as he signed the Wilderness Act into law.

The Wilderness Act immediately placed 54 areas within the National Wilderness Preservation System, including some of America’s most iconic Wilderness areas: the Bob Marshall in Montana, the Boundary Waters in Minnesota, the Ansel Adams in California, and, of course, the Gila Wilderness.

Congress later protected 202,016 acres adjacent to the Gila Wilderness, naming it the Aldo Leopold Wilderness. Together, these two areas form an uninterrupted wilderness the size of Rhode Island. It’s a continuous sweep of country that stretches for 27 miles north to south and 39 miles east to west. Hunters stalk bighorn sheep and Rocky Mountain elk in the highlands each fall. History buffs flock to the numerous cliff dwellings that Mogollon people built around 1300 AD. Hikers can follow the 800 miles of trail to the 10,895-foot summit of Whitewater Baldy, the area’s tallest peak, or along a rushing creek in a canyon only ten feet wide.

Most importantly, the Gila Wilderness protects the relative abundance of what the region lacks—water. The West Fork, Middle Fork, and East Fork of the Gila River elbow through twisting canyons as they tumble down the west slope of the Continental Divide. Each fork is over 30 miles long, and they are the longest free-flowing rivers in New Mexico. Sycamore, walnut, cottonwood, and willows grow along their banks offering luxurious shade to native grasses and habitat to over 300 species of birds.

The Gila Wilderness today is as healthy as it was in Leopold’s time. After decades of absence, four healthy packs of Mexican wolves again prowl the Gila through successful reintroduction efforts. To celebrate the Wilderness Act’s 50th Anniversary this year, you can still disappear into the Gila Wilderness and hear the wolf’s howl at a quiet, moonlit camp and contemplate, as Leopold did, “the hidden meaning within the howl of the wolf, long known among mountains, but seldom perceived among men.”