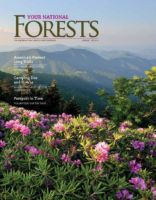 Picture a group of people spread out over a patch of bare ground intently focused on the unearthed soil beneath them. Birds chirp and sing; leaves rustle in the breeze; the scrape of hand trowels across the dirt cuts through the forest sounds. Someone calls out, “I found something,” and folks stand up, straighten their rounded backs and step carefully across the gridded plot to examine the find.

Scenes like this unfold across our National Forests and Grasslands as volunteers with the U.S.Forest Service’s Passport In Time program channel their inner Indiana Jones.

We tend to think our empty wild lands have always been such – empty and wild. But for millennia, native peoples inhabited or passed through these forests, valleys and mountains. More recently, pioneers, homesteaders and miners worked these landscapes. And as with all human habitation, each group left behind clues to their existence and culture. With 193 million acres of land, our National Forests and Grasslands contain many of these clues, buried beneath centuries of duff, topsoil and history.

The Passport In Time (PIT) program originated in Minnesota. In the 1980s, Gordon Peters, a Forest Service archaeologist, was teaching field-based archaeology through the University of Minnesota-Duluth. He brought his students to sites on the Superior National Forest where they worked alongside him and his colleagues. When no students signed up for the 1988 field class, Peters started recruiting volunteers to help excavate two sites on the Superior National Forest. The PIT program had begun.

Fast forward to 2016 and the PIT program has grown to include 117 National Forests in 36 states.

In addition to doing traditional archaeological excavations, the program also provides opportunities for volunteers to preserve and restore historic structures and sites managed by the Forest Service.

According to PIT Director Will Reed, the program has completed more than 3,000 projects since its humble beginnings, providing more than 40,000 participants with the opportunity to work alongside agency archaeologists and other volunteers. Astoundingly, these volunteers have contributed more than 17 million hours of work, or about 800 person years.

In fact, the program has grown so popular that managers struggle to find projects to place all of the willing participants. In the mid-90s the program offered more than 160 projects per year. Sadly, that number has fallen by half, a casualty of reduced budgets and time-strapped employees. There are approximately 360 archaeologists employed in the Forest Service, so you’d think there would be plenty of opportunity for them to work with volunteers on PIT projects. But most of them are engaged in “compliance” projects where their job is to ensure that the Forest Service doesn’t inadvertently compromise an important historic site when it approves a timber sale, restores a creek or uses prescribed fire to improve forest health. Volunteers aren’t typically used in compliance projects (although some PIT projects are compliance-based), so agency archaeologists have to make time for PIT projects outside of their demanding compliance work. Fortunately many of them do.

The Forest Service keeps the volunteer to supervisor ratio at roughly 4:1 to help ensure they follow standard protocols and properly catalogue their finds. PIT provides a rare opportunity for volunteers to help preserve America’s rich history and participate in on-the-ground work, all of which is supported by their tax dollars. Officials work hard to ensure that all volunteers, whose ages range from eight to eighty, can participate meaningfully in the project that interests them.

The variety of projects and the connections that volunteers make with each other and Forest Service staff keep volunteers returning year after year. In fact, the PIT program includes an actual “passport” in which volunteers log their time. After each project, the project leader stamps the passport and logs the volunteer’s hours. Additionally the PIT website maintains a “PIT Honor Roll” that lists the volunteers who have logged more than 500 hours through the program. Six superstar volunteers have donated more than 5,000 hours to the program to date.

The types of projects are as varied as the National Forests and Grasslands. While many of the projects do involve “traditional” archaeology, e.g., excavating a site, screening the dirt and cataloguing the artifacts, participants may also elect to restore historic structures like lookout towers, stabilize ancient dwellings, care-take historic sites or survey rugged backcountry locations. Oral history projects, archival research and analysis and curation of artifacts round out the program’s options.

Reed says that the agency receives roughly twice as many applicants than it can handle and some projects receive way more interest than that. Two hundred and eleven people applied for two spots on a Salmon River project. On a recent opportunity on the Chattahoochee National Forest outside of Atlanta, more than 150 people applied for the project’s 8 slots. In addition to maintaining a low volunteer to supervisor ratio for quality concerns, an obvious need to prevent damage to the very resources the projects are protecting limits participants as well.

“Really this was a program we cooked up because people wanted do what Forest Service staff were doing. But it also gives our employees a chance to be more than just bureaucrats; they can set these projects up and do real archaeology, which is what they want to be doing.”

As with countless Forest Service programs, the PIT program works with partners. The most prominent is the SRI Foundation which “seeks to enrich society by fostering Historic Preservation.” The Foundation maintains the PIT Clearinghouse, which is the system by which volunteers are matched to projects. This is no small task. With dozens of projects each year and hundreds, if not thousands, of current and past volunteers, project leaders consider applicants very carefully.

As the PIT website explains: “Project leaders look for a balance. They try to bring people to the project from the local area and from across the country. They like a balance of men and women. If children are accepted, they look for families as well as individuals. They accept people with experience and those who have never worked on an archaeological project in their lives. And they look for past PIT volunteers as well as new people.” Applicants who aren’t chosen for a particular project can work with the PIT Clearinghouse to find other opportunities to participate.

What else surprises Reed, who’s worked with the program for nearly two decades? The breadth and variety of projects his team of archaeologists comes up with each season. Volunteers dug up a WWII-era airplane on a National Forest in Idaho. Participants adept at using metal detectors mapped an entire ghost town in Arizona. On the Shawnee National Forest in Illinois, volunteers collected and archived oral histories of a group of grandmothers as they created a quilt. One dedicated volunteer spent several seasons sea kayaking remote Alaskan coastlines, surveying and recording prehistoric art found on rocks along the shore. In California, a PIT crew worked with elders to collect basket weaving materials and then learned how to make baskets using traditional methods.

The lucky volunteers chosen make lasting memories and friendships. One dedicated participant met his future wife on a PIT project, courted her over several other projects and ultimately married her during a PIT project on the Sabine National Forest in Texas. The bride wore a hard hat under her veil, and the groom carried a trowel in his back pocket. While most PIT-enabled relationships don’t end in marriage, this happy story conveys the real connections people make to the program and the landscape.

As Director Reed puts it, “The goal of PIT is to preserve the nation’s past with the help of the public. PIT volunteers contribute to vital environmental and historical research on public lands. Participation helps the Forest Service not only to protect and conserve the sites, memories and objects that chronicle our collective past, but also to understand the human story in North America and ensure that story is told to our children and grandchildren. We cannot do it without them!”

If you’re interested in channeling your own Indiana Jones, dust off that fedora and grab a trowel.

Learn more about Passport in Time at passportintime.com