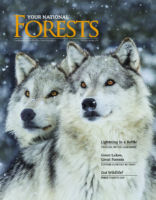 Sure, National Parks tend to grab the attention of dedicated wildlife watchers and for good reasons. Yellowstone’s grizzly bear population is unrivaled outside of Alaska; the Everglades hosts pastel pink flamingos, bright white egrets and even crocodiles; and managers are using trained dogs to keep Glacier’s mountain goats from getting too close to visitors. But if you’ve ever spent an hour waiting for a “bear jam” to clear out or been surrounded by camera-toting tourists on the board walk at Logan Pass, you’ll be pleased to know there are twice as many acres of National Forests as National Parks. And they’re teeming with equally impressive wildlife viewing opportunities.

The American West is synonymous with wolves, and parks like Yellowstone and Glacier can be good spots to catch sight of these elusive canines. But wolves also haunt the Superior National Forest in northern Minnesota—between 300 and 400 of them in fact. These wolves survived extirpation efforts that removed wolves from the rest of the country, and for that reason the region is considered the last stronghold of the gray wolf in the lower 48 states. While recolonization efforts in Yellowstone have rebounded wolf populations throughout the northern Rockies and into Washington, Oregon and even California, the wolves of the Superior National Forest have been present for thousands of years.

National Forests may be better known for sprawling forests than for aquatic mammals. But Alaska’s Tongass National Forest has it all: glaciated mountains, old-growth trees, and whales, otters and sea lions. Covering a massive 17 million acres, the Tongass includes a lot of ocean, which teem with humpback and orca whales. Sea lions and sea otters also ply these rugged coastlines, searching for salmon, crustaceans and other prey. Alaska’s Chugach National Forest offers plenty of whale watching too, especially throughout Prince William Sound. In both forests, sea-bound visitors can glimpse minke whales, beluga whales, gray whales, and even the biggest of the big—blue whales.

Numerous whale-watching companies operate out of seaside towns that border both the Tongass and the Chugach, and those interested in piloting their own craft can rent sea kayaks or join a tour to get an up close and personal view of these denizens of the deep.

Bats get a bad rap. But these flying mammals are critical to farmers and foresters and therefore to all humans. They consume millions of insects each night, helping prevent damage to crops, trees and other valuable resources. While Carlsbad Caverns may be one of the best-known locations to view bats, National Forests like Arkansas’ Ozark-St. Francis and Ouachita host populations of some of the most imperiled bat species in the country.

The Ozark-St. Francis hosts 13 caves critical to bats, including the Bonanza Cave, home to 15 percent of the total known gray bat population, a whopping quarter million bats. This cave is remote and difficult to access without local knowledge, but another cave on the Ozark-St. Francis, Blanchard Springs Cavern, is accessible to people and houses a few different bat populations. Organized tours provide a glimpse into the Cavern, and bat fans can post up outside of the cave’s “natural entrance” at twilight to see the bats emerge in mass for their evening hunting. An on-site visitor center offers information and tours, and nearby campgrounds round out the experience.

Unfortunately, White-nosed Syndrome has severely affected bat populations across the eastern U.S., so many caves have been closed to prevent the spread of the disease. Please respect all cave closures and talk with local Forest Service officials about any rules or regulations governing caves you want to visit.

Wild, unpredictable, dangerous and smart, bears are the reigning kings and queens of wild landscapes across America. The Tongass and Chugach host robust populations of bruins, but you don’t have to fly all the way to Alaska to see bears. The National Forests that surround Glacier (Flathead) and Yellowstone (Custer-Gallatin, Shoshone, Bridger-Teton and Caribou-Targhee) offer some of the best grizzly bear viewing opportunities in the lower 48. When camping and hiking in these forests, follow all food storage regulations and carry bear spray at all times. These simple rules help ensure your safety and the bears’ safety. Remember, a fed bear is a dead bear.

Black bears are more widespread than their larger, brown cousins and inhabit forests across the country. One unlikely hotspot for bears is Florida’s Ocala National Forest. The Ocala is home to Florida’s largest population of black bears; a 2016 statewide estimate noted that the area around the Ocala supports roughly 1,200 bears with the highest density in the Forest itself. Statewide, officials estimate Florida has more than 4,000 bears, meaning the Ocala, which represents less than one percent of Florida’s landscape, hosts more than quarter of the state’s bear population.

The Black Bear Scenic Byway is a fun, and safe, way to see wild bears. The 60-mile route connects Silver Springs to Ormond Beach and runs straight through the Ocala. The Florida Wildlife Festival (previously the Florida Black Bear Festival), held each fall in Umatilla, Florida, offers families a chance to learn about black bears and even take a field trip into the Ocala with local experts. Bears are regular visitors to Ocala campgrounds, so food storage and clean campsites are required across the Forest. With black bear populations increasing in forests across the country, these rules are good to follow anywhere.

Bird nerds unite! Across the country, National Forests provide some of the best habitat for resident and migrating birds. But a few National Forests stand out. In the White Mountain National Forest, a rare thrush makes its home on the windswept peaks that stretch across the Forest. The Bicknell’s thrush is a small, gray bird that favors the high-elevation and stunted forests found throughout the Whites. The Forest Service claims that the Whites provide the largest block of breeding habitat for this life-list bird in the northeast.

A world away on the El Yunque National Forest in Puerto Rico, birders can find the Puerto Rican parrot. It’s the only extant parrot endemic to the Puerto Rican archipelago—in other words, it’s the only parrot still found in Puerto Rico that existed prior to European colonization. Mostly green in color, the bird has a bright red spot on its forehead and its flight feathers are a brilliant blue. The parrot is a secondary cavity nester (see Tree-Spotlight in this issue to learn how animals utilize snags), requiring mature forests for breeding and rearing its young. As such, habitat degradation has affected parrot populations, which reached a low of 13 individuals in 1975. Recovery efforts have helped the population rebound, and prior to hurricane Maria in 2017, 56 parrots lived in the El Yunque.

Since 2007, the U.S. Fish and Wildlife Service has operated Iguaca Aviary (iguaca is the native Puerto Rican name for the parrot) on the El Yunque Forest in partnership with the Forest Service. This facility maintains a captive breeding program that has helped the population recover. Captive-bred birds are trained and conditioned to live in the wild, and the Forest Service tracks parrots with radio transmitters for a year after release. Fortunately, the majority of the captive birds held at this facility and one other aviary on the island survived 2017’s devastating hurricanes and are poised to help the species continue its long recovery.

Every fall, birders and photographers flock to Lake Coeur d’Alene in the Idaho Panhandle to watch America’s mascot, the bald eagle, gorge on the lake’s Kokanee salmon population. National Forest trailheads and campgrounds dot the lake’s shoreline, offering prime spots to check out this seasonal wonder. It’s not uncommon to see a dozen or more eagles at any one time, especially near the Mineral Ridge Trailhead, on the lake’s north east shore.

In the pristine headwaters of Appalachia, a giant amphibian lives as it has for millions of years. Known colloquially as “snot otters,” “mud devils,” “Allegheny alligators,” or “lasagna lizards,” (I swear, I’m not making this up) the Crytobranchus alleganiensis, or hellbender salamander, is the third largest salamander in the world and a unique resident of the rushing streams and rivers that drain the rolling mountains of the eastern U.S.

Hellbenders live in clear, cool water streams that are found on National Forests in Tennessee, Kentucky, West Virginia, Georgia and Pennsylvania. Because they breathe through their skin, they are particularly susceptible to siltation and sedimentation that happens when roads, development and other human activities impact their habitat. Fortunately, the streams in these National Forests have recovered from century-old logging efforts and provide suitable habitat for these threatened, ancient creatures. Long-lived, hellbenders can reach 50 years of age and adults generally measure about two-feet long and weigh up to five pounds.

Handling these critters is illegal unless accidentally caught by anglers or by collectors with special permits. Your best bet is to use a snorkel and mask to peer into their underwater realm (be careful when floating down stream). Guided tours on the Nantahala-Pisgah National Forest’s French Broad River are specially designed to glimpse hellbenders during their fall mating season, when males grab each other and alligator roll to determine nesting site dominance.

The Pacific Northwest is a mountain goat stronghold. High peaks and abundant alpine habitat host thousands of these rock-climbing ungulates. Mountain goats are native to the Cascade Mountains in central Washington, but a non-native population on the Olympic Peninsula has become well established following introduction efforts in the 1920s. Now, due to overpopulation (and the fact that they aren’t native to the Olympic range), the National Park Service and the U.S. Forest Service are removing mountain goats from the Olympics and transporting them via helicopter to the Okanogan-Wenatchee National Forest in central Washington. The program started in 2018 and officials expect to relocate roughly 350 of the 700 goats that live in the Park proper.

For an easy hike that almost guarantees mountain goat viewing, check out the Ptarmigan Ridge hike on the Okanogan-Wenatchee. In addition to truly spectacular views of Mt. Shuksan and Mt. Baker, there are roughly 200 mountain goats living in this area. As with all wildlife viewing, be sure to give the goats plenty of space; they are attracted to salt and can harass humans in the hopes of licking the mineral from clothes, hiking poles and even pools of urine.

Of course, this is but a glimpse of the wildlife that live on our National Forests. From (native) antelope to (invasive) zebra mussels, there are more than 3,000 species of wildlife living in these public lands. So, grab your binoculars, bear spray and camera and get out there. Share your wildlife photos with us for our Instagram page.