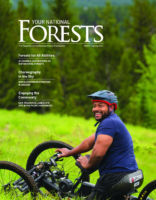 A new fuels reduction project will reduce the risk of catastrophic wildfire and flooding, and protect Phoenix’s water supply.

Under the crisp blue of an autumn sky, a man in a hard hat stands amid a tangle of fallen trees on a breathtakingly steep slope. The pile of deadfall is topped with neatly stacked branches cut by the chainsaw crews who went over this rugged ground the day before.

To the tune of thwopping helicopter blades, the man shades his eyes against the sun, tracking the enormous metal hook hanging from a longline the machine angles toward him. In one smooth movement, he plucks the hook from the air and slings it through a tether on the ground.

Then he turns and runs, high-stepping through the downed timber littering the rocky slope. The helicopter lifts the load, and the dead trees rise for a moment as if resurrected before the line lifts the bundle into the air. It flies to a landing area far downslope, deposits the cargo, and banks to repeat the process. On the ground, people and machines spring into action. They remove limbs from trunks, mulch wood, and arrange timber on trucks, clearing the zone for the helicopter’s next load.

This choreographed dance is not a standard logging operation. From research to planning to implementation, the Bill Williams Mountain Restoration Project in Northern Arizona is the most complex restoration undertaking most of its diverse stakeholders have ever taken on. But the goal is simple: remove hazardous fuels built up from 100 years of 20th-century fire suppression to save both the town below and major infrastructure downstream from catastrophic destruction.

In 2017, Coconino County conducted a study on fire and flood risk to its citizens that determined Bill Williams Mountain, in the Kaibab National Forest above the small town of Williams, was at high risk for extreme fire. In addition to destroying the communication and power infrastructure on the mountain's summit, the study found that if the mountain burned, the area’s seasonal monsoon rains would submerge Williams, a gateway to the Grand Canyon, in up to six feet of floodwater and debris, and present a serious risk to human lives.

Such an event would also shut down the BNSF Railroad and Interstate 40 and close the Grand Canyon Railway indefinitely. And because Bill Williams Mountain is the apex of six subwatersheds, flooding would jeopardize drinking water supplies locally, while impacting water quality all the way to downtown Phoenix, 160 miles away. In total, experts estimated the economic impact of such a post-fire flood event at between $300 million and $700 million, on top of the impossible-to-quantify social and emotional toll on residents.

All of this lent tremendous urgency for removing hazardous fuels from overgrown forests on Bill Williams Mountain. But that proposition was problematic, because the top of the mountain—the likeliest ignition point for fire and subsequently the most ruinous starting point for floods—is incredibly steep, rocky, and hard to access. It’s also protected habitat for the federally threatened Mexican Spotted Owl, which means there’s only a narrow window in the fall to conduct work.

And although Coconino County knew it needed to move on solutions here to protect its communities, and the Kaibab National Forest had completed an environmental review for restoring the mountain, neither alone had the entirety of resources needed to complete such a multifaceted treatment operation.

“Steep slope forest restoration is incredibly costly and complex. Funding and partnerships, then, were the missing pieces to make this project come together.”

For the previous five years, the NFF had worked through its Northern Arizona Forest Fund to reduce fire risk and restore watersheds across the Salt and Verde watersheds on the region’s five National Forests, including in the Bill Williams area. Since its inception, NAFF investments and projects gained momentum and scale, allowing the organization to forge partnerships it could then build on to fund and manage larger, more complex projects, including the Bill Williams restoration effort.

Starting in 2019, the NFF leveraged funds and partnerships with Coconino County, the Arizona Department of Forestry and Fire Management, and the Arizona Water Protection Fund, as well as private foundations, to support implementation needs. Restoration work began on the steep slopes of Wood For Life Bill Williams Mountain in the fall of 2019 and is expected to run through 2024, with NFF-led treatment spanning 1,000 acres of the hardest to access and most costly to treat.

“Building a partnership with the NFF is critical for the District as we contribute funding for forest restoration work on the steep slopes of the mountain,” said Jay Smith, Forest Restoration Director with Coconino County Public Works. “Catastrophic wildfire and post-wildfire flooding continues to be the number one public safety threat to communities within Coconino County.”

NFF Arizona Program Manager Sasha Stortz spent the past decade in collaborative natural resource management, so she knows what it takes to convene stakeholders to approve and support a project. “To be on the implementation side of things on Bill Williams and see how much collaboration it takes to get things done is really impressive,” said Stortz, giving examples like funding, communications and outreach, and the relationship to the contractor doing the work. “There’s a lot of players—county, Forest Service, state agencies, private foundations—all working together to get this done.”