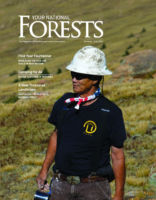 From the famous mountain towns of Ketchum and Hailey, Bald Mountain defines this National Forest, the ski runs of Sun Valley Resort streaming from its flanks like ribbons. The entrance to the Sun Valley Community School has a perfect view of Baldy, as the locals know it. The mountain is the starring character out the window of science teacher Annie DeAngelo’s seventh-grade classroom.

But lately this view has been changing as bark beetles ravage Baldy’s trees, imperiling the ecosystem and everything that a healthy Bald Mountain represents economically and culturally to these communities. Which is why, one day last October, half a dozen of Ms. DeAngelo’s students spilled from a vehicle stopped at the base of Baldy, wielding cameras to document it at this exact point in time from this exact location.

These students are a foundational part of a broader citizen-led effort to restore Bald Mountain’s forest health. The National Forest Foundation is helping to convene and fund this restoration effort through its Treasured Landscapes, Unforgettable Experiences program; since 2011, the program has worked around the U.S. to restore and benefit specific sites while helping locals get involved with stewardship. The NFF has a goal to invest in $1.6 million worth of projects at this site on the Sawtooth in the next five years.

Theodore Roosevelt, the godfather of conservation in the U.S., created the Sawtooth Forest Reserve in 1905, which later became the Sawtooth National Forest. Spearheaded by Senator Frank Church, Congress in 1972 designated a section on the northern end near Stanley as a National Recreation Area and the Sawtooth Wilderness to protect and preserve the area for its natural beauty and its recreational and ecological value. Idahoans favored the NRA status over a National Park designation to preserve the ranching, hunting and fishing so important to the region’s heritage. In 2015, Congress added the Hemingway–Boulders and Cecil D. Andrus White Clouds Wilderness areas to the NRA, protecting 158,700 new acres and making just over half of the Sawtooth NRA designated wilderness.

Hundreds of thousands of people visit annually to hike the region’s 1,000 miles of trails, and to hunt, fish, raft, horseback ride, mountain bike, camp and ski. During the summer, the tiny town of Stanley, which sits on the northern end of the forest, swells from a sleepy winter population of 65 to support tens of thousands of visitors.

On its southern end, Sun Valley Resort has been the beating heart of Ketchum and Hailey since the resort was built in 1936. The nation’s first ski area with chairlifts, it has become a year-round destination for celebrities, Olympic athletes and recreational enthusiasts.

Sun Valley’s storied history defines much of the identity of its surrounding towns, along with providing their economic foundation. The winter of 2018/19 saw more than 400,000 skier days and 110,000 room nights sold in local hotels. Ongoing forest health is not only a priority ecologically, but also for the wellbeing of those who call the Sawtooth region home.

Through the Treasured Landscapes program, the NFF plans to support these priorities. In addition to the Bald Mountain project, the NFF will work with local partners and the community to improve aquatic ecosystems on the Big Wood and Salmon rivers, relocating trailheads, reclaiming unauthorized routes, improving dispersed campsites, and restoring riparian areas. Investments in ecologically sustainable recreation will focus on maintenance needs and aging infrastructure. And the project will increase the pace and scale of forest health restoration through tree planting efforts, invasive species removal, and native habitat restoration.

Back in DeAngelo’s classroom, students are learning how a century-long federal policy of fire suppression on public lands (well-intentioned but misjudged) allowed species that fire usually controls, like mistletoe, bark beetles and Douglas-fir tussock moth, to take a fatal toll on trees. It also created an enormous tinderbox out of 100 years of unburned fuel across forest floors.

In 2007, the Castle Rock Fire raged right to the edge of Sun Valley Ski Resort, so close that firefighters used the snow-making cannons on the resort to hose down the hillsides. In 2013, the Beaver Creek Fire consumed the forest along Baldy’s other perimeter. The result was an island of green on Bald Mountain surrounded by significantly burned forest, which led to an exponential increase in bark beetle infestation and a tenacious residence of dwarf mistletoe, which weakens the ability of trees to withstand the beetles. In short, the forest on Bald Mountain is dying.

“If the forest disappears or that iconic viewshed changes, town stands to really change for the worse,” DeAngelo said. “It’s the backbone of the economy here. But more than that, it’s a real gathering place where so many different people from so many parts of our community can be outside together, whether it’s skiing, hiking, biking, or just sitting to take it in.”

Over the next five years, the NFF will work with local schools on the viewshed monitoring program that DeAngelo’s seventh graders designed and began implementing last October. Students will also plant trees and help the citizen-led Bald Mountain workgroup with whitebark pine assessments and beetle deterrence on Baldy’s remaining trees.

Cassidy Randall spends as much time as possible outside in the places she writes about, tracking down the most compelling stories on adventure, travel, the environment and intersections between. Find her at cassidyrandall.com.