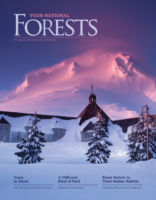 In 2007, archaeologists identified bison bones at a prehistoric village on Midewin National Tallgrass Prairie dating back to around the year 1600. By the early 1800s, settlers had eradicated bison from Illinois. Thanks to an NFF-led effort, these majestic creatures are back in their native habitat from a time long gone.

An hour away from Chicago’s towering sky scrapers and Lake Shore Drive, Midewin takes life at a slower pace. Quiet sunrises showcase fields of wildflowers and chattering birds. Remnant bunkers from Midewin’s past as the Joliet Arsenal dot the horizon.

In 2012, the National Forest Foundation designated Midewin as a signature site in its Treasured Landscapes, Unforgettable Experiences conservation campaign. Working closely with a stakeholder group, the NFF is restoring 2,000 acres of the tallgrass prairie. Complementing this restoration effort, we worked with our partners to bring bison back to the prairie, providing a unique opportunity to learn if and how bison can impact prairie restoration.

Tallgrass prairies, like any landscape, require many components for a healthy ecosystem. Since its inception, Midewin has been working to add those elements—native grasses, controlled fire and bison. With bison now contentedly grazing the prairie’s swaying grasses, officials will be able to see how the various elements interact and benefit each other.

Changes on the Landscape

At 19,000 acres, Midewin is the largest single parcel of protected open space in northeastern Illinois; it provides critical habitat for birds such as bobolinks, Henslow’s sparrows and grasshopper sparrows. The bison experiment has several focus areas, one of which is exploring whether different grazing patterns between bison and cattle will benefit the grassland habitat Midewin offers these and others birds.

While cattle have grazed at Midewin for decades, they, like any animal, have a particular diet. Cattle prefer to eat grasses and forbs (pretty much anything that is not grass, tree or shrub). Bison on the other hand, prefer to eat only grass.

“The cattle provide habitat for grassland birds who like short grasses. We’re hoping with the bison there will be taller and shorter areas, kind of a mix. So then you’ll get a mix of birds.”

As with any experiment, data collection is key.

Staff have years of data about bird populations. At established points throughout Midewin, they regularly count the birds they see and hear. They also collect information about grass height, depth of the litter (amount of dead matter on the ground) and the number of cattle grazing in that area.

“With the bison there, we’ll monitor the birds like we have been. We’ll be able to monitor the grass height, the litter depth and we’ll know how many bison are out there. So we’ll have the same information and we’ll compare it,” explained Glass.

As the bison settle into their new home, their presence may impact more than just the grassland birds. Glass expects the increasingly rare Franklin’s ground squirrels to like the bison’s pastures with tall vegetation.

“[Franklin’s ground squirrels] like really tall, rank vegetation that they can burrow in. If we get that heterogeneity in the taller grasses, maybe we can get Franklin's in there. Who knows?” said Glass.

Coyotes might also prove an interesting factor. Midewin is not a zoo, but a natural ecosystem with predators and prey.

“The coyotes can’t take on an adult bison but they could probably bother a young one. It’ll be interesting to see how that all plays out,” said Glass.

Glass says they’re not sure what exactly will happen to the landscape after the bison arrive. “We have some ideas but are ready to be surprised.”

At The Nature Conservancy’s nearby Nachusa Grasslands, staff are monitoring bison introduced last year for impacts on tallgrass prairie health. While it is too soon for results on that front, the staff have noticed subtle changes.

“Researchers have noticed that a lot of the nests of small mammals like mice, voles and shrews are being made out of bison hair,” explained Cody Considine, a restoration ecologist for Nachusa.

Public interest has proven to be a big and unforeseen aspect of the bison’s presence at Nachusa.

“Probably the biggest challenge that we didn’t expect is the amount of interest that media and people have with the animals. That’s created a lot of extra work that we didn’t necessarily anticipate,” explained Considine.

Midewin is no stranger to managing herds. Throughout the rolling hills and windblown grasses of Midewin, cattle graze with gusto. Like many other units of the Forest Service, Midewin maintains a grazing permit system. Currently, there are approximately 950 head of cattle grazing on about 3,700 acres of Midewin. Fortunately for the land and staff, the permitees very much support Midewin’s mission.

“It’s really refreshing to work with people who understand and are in line with the overall purpose of Midewin. They are here to graze their cattle, but they are also here as stewards of the land,” said range management specialist Kelly Gutknecht.

Unlike the privately-owned cattle grazing there, Midewin’s bison herd is owned and therefore managed by the Forest Service.

“It will be myself working hand-in-hand with prairie ecologist William Glass,” explained Gutknecht. “We will be vigilant and care for the bison appropriately as needed.”

“We want them to be free-ranging bison and to interact with them as minimally as possible. They won’t depend on us for things. We want them to graze. And bison grazing will help us meet the goals at Midewin. That’s part of the reason that they’re here.”

In preparation for the herd, Midewin set aside 1,200 acres for the bison habitat. Their enclosure is surrounded by seven miles of six-foot tall fencing and includes a corral area with hydraulic gates and chutes used to handle the animals once a year. The corral area is surrounded by three smaller “trap pastures,” each allowing access into the corral area.

Gutknecht explained: “The corral area will always remain open for the bison; we want them to have a positive association with it. It’s an area that will be used for water and/or supplements as well as annual checkups.” Officials hope that the bison's comfort level with the corral area will allow for a smooth round-up each fall, causing minimal discomfort to the animals.

In everything it does, the Forest Service adapts to change. New challenges inspire new solutions and ways to manage National Forests and Grasslands for the greatest good. Given the nature of the bison experiment, Midewin is prepared for the unexpected.

As Glass explained: “There’s all these cool little things that could happen, some of which we don’t even know or haven’t even thought about. I think there’s going to be a lot of things we’re going to learn.”