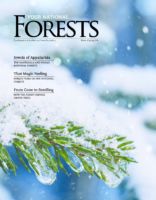 While we tend to think of forests as unchanging and permanent, the reality is that our forests are dynamic systems that are constantly changing. Millions of years ago, parts of Arizona and Utah that are now deserts were thick with moist vegetation. As climatic conditions changed, individual species and whole ecosystems adjusted to those changes, albeit slowly, over long periods. We all know that change has always occurred, but our climate is now changing faster than some trees can adapt.

We generally assume that a warming climate means that everywhere is becoming hotter and drier, but the impacts from a changing climate are actually quite variable. In the Southwest, for example, weather will likely get warmer and drier, but the Northeast and eastern Plains states are expected to get more precipitation than they do now, even as it warms up. How all of this will affect our nation’s forests is a complex question for the professionals in the U.S. Forest Service who are tasked with managing 193 million acres of National Forests.

Because trees’ main sources of energy are sunlight and water, it’s easy to see that climate has a huge effect on them. Each tree species is adapted to certain environmental conditions—a coast redwood requires fog drifting inland from the sea, whereas whitebark pines prefer exposed alpine ridges. When those environmental conditions change significantly, as they are with our warming climate, trees often can’t survive in the new conditions. That gives them only one option: Move.

Of course trees can’t move in the same way that humans or other animals can. Tree movement occurs over decades or centuries as trees shift their range to pursue more favorable environmental conditions. With climate change driving rapid temperature and precipitation changes, we can see this already happening in the western U.S as cold-tolerant species shift in response to the warming climate. Scientists have documented recent latitudinal and elevational migrations for tree species, that is, some western tree species are moving north and/or climbing in elevation.

Tree species found in the “island” mountain ranges of the American Southwest, are a good example of how trees are shifting their elevation. Island mountains ranges are just as their name suggests, islands of mountains rising up from a broader “sea” of low-elevation terrain. Disconnected from continuous mountain ranges that would normally permit a northward migration, the species that live in these “islands” are left to find more favorable ground by moving up in elevation. But as our climate warms, island range species like corkbark fir and blue spruce will literally climb off the top of mountains searching for favorable conditions.

In addition to rising temperatures, we know that climate change is affecting precipitation patterns too. And trees are responding to this as well.

Recent research demonstrates that nearly three quarters of tree species native to eastern forests have moved their population westward since 1980. Why not north? Instead of seeking colder temperatures, these deciduous trees are following increased precipitation to the central U.S.

Can trees’ migrations be assisted? Yes. Forest managers are experimenting with planting trees in locations where the climate may favor them into the future. In the northwestern U.S., foresters have planted Douglas fir around the region to test how the species responds to variations in climate. In the Canadian province of British Columbia, foresters are now planting western larch in areas that are beyond the historic geographic range for the species, but are predicted to be favorable in the coming decades.

Another example of such “assisted migration” in action can be seen with the Florida Torreya, a rare southeastern tree species known to inhabit a small sliver of northern Florida and southern Georgia. Facing a likely extinction from a warming climate and restricted range, foresters are experimenting with planting Florida Torreya farther north in Georgia and even into North Carolina.

Changes in climate are nothing new for trees. These remarkable species have been providing oxygen and filtering water for more than 300 million years. Over this vast history, ice ages have come and gone, mass extinctions have drastically changed life on Earth and yet trees have endured. What’s different now is how fast our climate is changing. This rate of change is affecting how and which trees will survive into the future.

Regardless of how aggressively we work to reduce the impacts from our rapidly changing climate, most, if not all, of our forests will likely look different in a century or two. Forest managers can help some species survive and even thrive in new locations. But as these forests change and as the species that comprise them shift, the animals and humans that depend on them will face new challenges. Will we be ready?