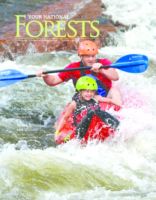 I’ve traveled the world on horseback for over a decade, discovering spectacular places to saddle up for Equitrekking, the Emmy-winning PBS series I created. There’s something special about seeing a place on horseback and riding through rugged and remote natural areas with an equine partner.

You unobtrusively get a window into the history, culture and geography of places that may not be easily accessible by other means.

As an East Coast equestrian, I relish the chance to ride the American West with its majestic mountains, and I love the Southwest’s stark deserts, canyons and abundant star gazing. Equally magnificent are the Northeastern forests and Midwest grasslands, where trails conveniently take you away from urban city-scapes into a natural oasis and back again in short order. Whether you ride solo for a moment of zen or saddle up in a new location with a seasoned wrangler, exploring “in the saddle” can bring you back to a simpler time and enrich your mind and soul.

The following are special National Forests where equestrian trails, campsites, dude ranches and history await. These must-explores will delight the casual and experienced equestrian alike.

With several peaks rising above 14,000 feet, sheer canyons and steep switchbacks, riding in the San Juan National Forest is challenging. But riders who venture out in this part of southwestern Colorado are greatly rewarded with awesome surroundings. There are a lot of places to ride in the San Juan, but the trip up Pass Creek Trail to Engineer Mountain is particularly dramatic.

July and August are the best months to ride in the San Juan. The weather is mild and the wildflowers are in bloom. In June and maybe even July, you can face snow drifts since these trails run along the north side of the mountain. August is monsoon season, so you will definitely want to bring rain gear and wrap up your ride by mid-day to avoid dangerous lightning storms. I was caught in a July hailstorm near the base of Engineer Mountain, which only added to the adventure of exploring this vast National Forest.

The trails ascend through sub-alpine growth and offer many chances to gaze up at the green strata of Engineer Mountain, which towers above the trail. Once above timberline, you pass through open fields ablaze with wildflowers, including primrose, geraniums and orchids. At around 12,000 feet, Lake Electra shimmers in the distance along with the Needle Mountains, covered in toothpicklike trees. At what seems like the top of the world, views of the awe-inspiring Rocky Mountains overwhelm the senses and drop all the way to the Animas River Valley far below. On a clear day, vistas extend all the way to New Mexico.

Illinois is nicknamed “The Prairie State,” yet less than .01 percent of the state’s original prairie remains. An hour from Chicago sits Midewin National Tallgrass Prairie, where volunteers and the U.S. Forest Service labor to restore tallgrass prairie to the largest open space in the metropolitan area. Equestrians are part of this effort, which I learned during a trail ride with the Will County Trail Riders while filming for my new PBS TV series, Travels with Darley.

There are 20 miles of multi-use trails at Midewin that pass through areas with rich history related to Native Americans, pioneers and the U.S. Army. You can meander past bunkers from the former Joliet Arsenal, where workers produced TNT during World War II. Along the way you might encounter bison recently reintroduced to the prairie—a special sight for adventurers. Pretty purple and yellow wildflowers and open range extend as far as you can see at this 20,000-acre site. This hidden equestrian treasure isn’t far from America’s Second City, but it feels a world away.

Covering more than a million acres in southeastern Wyoming, the Medicine Bow was designated as a National Forest in 1902 and named after the local Native Americans who held powwows, performed healing rituals and sourced rich mahogany wood for their bows. There are a variety of interesting trails in the Medicine Bow, and some of the best and most accessible are along the western end of the Snowy Range Scenic Byway, about 22 miles from the town of Saratoga.

For those seeking to ride and perhaps stay a while, the historic Medicine Bow Lodge operates within the Forest and offers travelers the opportunity to saddle up for short rides or overnight pack trips. This ranch has welcomed guests for a century. That a dude ranch can last that long is special in itself, and during my visit, I realized why it’s endured—the riding is incredible.

Trails in this part of the Medicine Bow pass through luxuriant woodlands and glacier-carved valleys dotted with wildflowers and cut by tranquil brooks. Asters with their starry shaped flower head, Indian Paintbrush, Wyoming’s state flower, wild sage and vibrant lupine are just some of the flowers blooming during spring and summer. You’ll ride at higher elevations here and whether you choose to stay at the ranch or at a campground, you will find new trails to discover every day.

New York State’s only National Forest, the Finger Lakes National Forest, is a hidden gem. The longest continuous footpath in New York, the Finger Lakes Trail, runs through the Forest and both this trail and others offer year-round riding adventures. Located between Cayuga Lake and Seneca Lake, the Forest is open to travelers who wish to bring their own horses and camp at the semiprivate Backbone Horse Camp or ride out with local stables.

We saddled up with D&K Ranch owner Kelly Terry, who rescues and rehabilitates horses. Our trek took us through Horton Pasture with sweeping views down to Seneca Lake and a pretty meadow where goldenrod and colorful flowers abound in the fall. This forest was once home to farms and sawmills. Today cattle still graze on forest lands, adding to the pastoral scene.

Not far outside of the Forest, breweries, wineries and locally owned restaurants give travelers a nice mix of adventure and sustenance. The town of Watkins Glen is also close to the Forest, offering adventures on Seneca Lake and making for a well-rounded National Forest adventure in state more associated with the Big Apple than long trail rides.

Drive Southwest from Albuquerque for about six hours and not only will you drive one of the most scenic roads in the United States, but you will also be on your way to our nation’s oldest established wilderness area, located on the Gila National Forest. With 3.3 million acres and with four different life zones, the sheer size and diversity of this National Forest make exploration nearly limitless.

With wilderness areas off limits to vehicles and bikes, traveling by foot or horseback are the best ways to discover the Gila Wilderness. Several ranches and outfitters operate in the Gila and a number of campgrounds have corals and troughs for horses, so travelers can ride with an established stable or bring their own horses.

This National Forest offers a plethora of scenic diversity to riders, ranging from high desert to alpine forests to spectacular rock formations. You may also encounter varied wildlife, including mountain lions, bighorn sheep, javelina, black bear, wild turkey and eagles. Geronimo, lion hunter Ben Lilly, and conservationist Aldo Leopold are just a few of the notable people who have explored the Gila. While I recommend it, you don’t have to ride deep into a weathered canyon to feel firsthand the spirit of the Native Americans, outlaws and explorers that have trod before you. This land is rich in history and legends.

On Alaska’s Kenai Peninsula, receding glaciers left snowcapped mountains that cascade into turquoise lakes and wild terrain where you’re more likely to spot bears and bald eagles than people. This part of southcentral Alaska is home to the Chugach National Forest, the second largest National Forest in the United States. A great way to explore this vast, but surprisingly accessible, National Forest is to take a horseback ride along the Russian Gap Trail, a route that gold seekers from Russia traversed during the 1850s. By 1896, the Kenai Peninsula was a hot spot for those with gold fever and this history is worth exploring.

Alaska’s midnight sun allows for extra-long saddle days during the two months surrounding the summer solstice. I enjoyed the extra light in July, riding out from Cooper Landing with Alaska Horsemen Trail Adventures, a local outfitter that takes travelers out for rides from one hour to several days to explore the Chugach.

Trails wind through forests of tall, thin trees, where you may spot moose, brown bear, black bear, or Alaska’s state bird, the ptarmigan. As you gain elevation, grand vistas open up to reveal verdant blankets of trees and stunning mountain views in this pristine area of the world where horses are very helpful in covering the craggy ground.

Whether you’re an avid hiker, mountain biker or perhaps prefer driving through our National Forests’ scenic byways, consider changing things up and climbing into a saddle on your next National Forest adventure. You’ll most certainly get a different take on the area, and you’ll probably see places that you never imagined you’d reach on your own.

Darley Newman is the five-time Emmy Award-nominated host, writer and producer of Equitrekking and Travels with Darley on PBS, AOL, MSN and Amazon Prime and lover of the great outdoors.