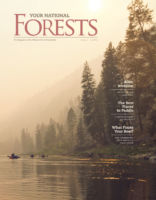 Above tree line, the regal peaks of the Tahoe National Forest herald a landscape of towering forests, rushing streams and shimmering groves of aspens.

Cirques carved by glaciers cradle alpine meadows lush with spring wildflowers. Dozens of small streams flowing into two major river systems drain the 850,000-acre forest near the northern end of the Sierra Nevada, the mountainous block of granite that tilts along the California border with Nevada. The panorama of snow-capped mountains and blue of Lake Tahoe that inspired Mark Twain have enticed Gary Snyder and other writers to delve into the area's more subtle beauty: the fresh scent of pine in an unexplored grove; the drip of snowmelt on a granite ledge.

East to west, the Tahoe National Forest spans the Sierra spine from the high-desert sage and juniper of the Great Basin to the verdant orchards and cultivated ­fields of the Sacramento Valley. It extends from Lake Tahoe in the south to the jagged Sierra Buttes in the north. With elevations that ascend from 1,500 to 9,000 feet, the Tahoe is home to a complex set of ecosystems that host diverse and endangered species such as the willow flycatcher, the yellow-legged frog and the elusive wolverine prowling in deep isolation.

A wide range of topography and climate offer four seasons of recreation that include skiing and snowmobiling, biking and horseback riding, and hiking to destinations just around the corner or as distant as Canada and Mexico on the Pacific Crest Trail.

Its rich mix of mountains, lakes and historic mining towns make the Tahoe one of the most popular recreation forests in the nation. Californians from San Francisco and Sacramento consider it their backyard and are among its two million annual visitors. The area also draws national and international visitors who come for more than its scenic beauty. A wide range of topography and climate offer four seasons of recreation that include skiing and snowmobiling, biking and horseback riding, and hiking to destinations just around the corner or as distant as Canada and Mexico on the Pacific Crest Trail.

Human history on the Tahoe dates back more than a millennium to the Washoe and Paiute people, who traveled back and forth with the seasons from Lake Tahoe to the Great Basin. They likely bestowed the region’s iconic lake with their word for “big water:” Tahoe. Fur trappers in the 1820s began the flow of “westward ho!” emigrants that included the ill-fated Donner Party in 1846. The trickle swelled to a flood after 1849 as fortune seekers poured into the Sierra in a get-rich-quick quest for gold and later silver. With strong government encouragement and funding, private railroad companies opening up the West took advantage of land grants to push across the Sierra. Along with a network of rail lines, the results include a still present checkerboard of private and federal land ownership.

As railroad construction and mining boomed, settlers began moving into the Truckee-Donner area in the early 1860s. Ranchers soon followed, bringing cattle and sheep to graze the meadows and hillsides. Among the marks left by the livestock industry are artful carvings on aspen trees made by lonesome Basque shepherds who spent months with only the company of their sheep. Uncontrolled mining, ranching and logging brought the region under federal management. Congress created “Forest Reserves” in 1891 to halt unrestrained exploitation of natural resources, including a vast tract in the Sierra. The Tahoe National Forest was established in 1908 as one of eight National Forests along the Sierra Nevada crest.

With railroads facilitating cross-country travel, the population centers that grew up along the Truckee River became transportation hubs. As recreation grew following WWII, outdoor enthusiasts flocked to play in the Tahoe’s sun and snow. By 1960, when the Winter Olympics were held at Squaw Valley, the Tahoe National Forest was ­firmly established as a world-class recreation area.

Today, the Tahoe's streams and forests bear the heavy toll of a century of resource extraction and year-round recreation. The Truckee River, once home to robust populations of Lahontan cutthroat trout, is listed as impaired. The mixed-conifer forests have been subject to clear-cutting and ­re suppression, leaving them overstocked and vulnerable to insect infestation and uncontrollable

wildfi­re. When the National Forest Foundation designated the Truckee River watershed as one of its Treasured Landscapes, it launched an ambitious program designed to restore forest and water resources for the well-being of both human and natural communities. With partners that include the Forest Service, Trout Unlimited, the Truckee River Watershed Council and University of California, Berkeley, restoration work has begun on 234,000 acres within the watershed.

The largest aquatic project is on Prosser Creek just below a Bureau of Reclamation dam. The Truckee River Watershed Council is improving habitat for spawning and mature trout by placing large boulders and logs in the channel to reestablish stream and riparian habitat. The NFF and its partners are also working to restore a fen near Sagehen Creek by decommissioning a road along its lower slope. Along with restoring the fen itself, the work will allow water to “sheet” across surrounding acres, improving the hydrology of the water table.

The Sagehen Basin forest health project aims to model a new approach to forest management. Designed by a collaborative group, the plan is to transform thick homogeneous stands of even-aged timber into patches of dense clusters set amid open areas. To get natural ­re back on this landscape, partners working with the University of California will eventually burn the more sparsely- vegetated south-facing slopes. This more natural mosaic of habitat will facilitate nesting, denning and foraging for species ranging from northern goshawks and spotted owls to martens.

The NFF's ­five-year program is already approaching one of its goals: linking the public to its science-based projects. Most of the work will be done by local contractors, with volunteers providing much of the hands-on follow up assistance, says Joanne Roubique, Truckee District Ranger. “The Truckee River watershed is an unrecognized gem. People are thrilled to be part of projects with this level of support for something they love so much."

As the work gets underway, its promise reaches beyond the watershed where it is focused. The NFF projects that develop healthy forests and clean, abundant water in the Truckee River will serve as models for other forests and watersheds in the Sierra and beyond. The lessons of what worked on the Tahoe—and what did not— will inform stream and forest restoration wherever local communities and far flung fans combine their passions to enhance their National Forests.