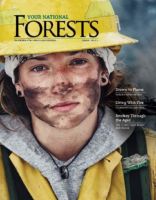 Big or small, gradual or sudden, change rhythmically punctuates human life. In the natural world, change is just as intrinsic and pattern-based. Seasonal fluctuations in temperature, shifts in sun light, and natural disturbances, like fire, are all part of nature’s cycle.

Most people resist change, especially change they consider destructive. Perhaps that’s why uncontrolled wildfires have been suppressed since the early 1900s. Fire can be damaging, and its effects certainly scar once verdant landscapes. But this destruction can also prove beneficial. In recent decades, ecologists and land managers have realized more fully how important fire is to the natural patterns of many ecosystems. This pattern, known as a “fire regime,” is different for each ecosystem. Each fire regime is important to maintaining forest and grassland health, even if it seems harmful at first glance.

Of course, no species is adapted to live in fire itself, but animals and plants can adapt to a fire regime. A fire regime includes, among other things, fire frequency, fire intensity and patterns of fuel consumption. Plants have a distinct disadvantage, compared to animals, in the face of fires. They can’t run, fly, creep or crawl out of a fire’s path. But they have adapted to survive, and even depend on, regular fire.

From armoring themselves with thick bark to developing ways to protect precious seeds, trees have developed several fascinating adaptations in response to a predictable fire pattern.

Trees in fire-prone areas develop thicker bark, in part, because thick bark does not catch fire or burn easily. It also protects the inside of the trunk, the living tissues that transport water and nutrients, from heat damage during high-frequency, low-intensity fires. Ponderosa pine (Pinus ponderosa, also commonly known as the bull pine, blackjack pine or western yellow pine) is a great example. This signature tree in the western United States has a thick and flaky bark, sometimes compared to pieces of a jigsaw puzzle, which perfectly withstands a low-intensity, surface fire. The species also drops lower branches as the trees grow older, which helps prevent fire from climbing up and burning the green needles higher up the tree.

This fire-survival strategy allows for the complete destruction of above-ground growth. Typically, species that regenerate by re-sprouting after they’ve burned have an extensive root system. Dormant buds are protected underground, and nutrients stored in the root system allow quick sprouting after the fire. Shortleaf pine (Pinus echinata, also occasionally called southern yellow pine or the shortstraw pine) employ this technique.

Unfortunately, they are declining across their range in the southeastern United States. In the West, the California buckeye (Aesculus californica, also commonly known as California horse-chestnut) is another example of a species that sprouts after a fire.

In environments where hot, fast moving fires are frequent, some pine species have developed very thick, hard cones that are literally glued shut with a strong resin. These “serotinous” cones can hang on a pine tree for years, long after the enclosed seeds mature. Only when a fire sweeps through, melting the resin, do these heat-dependent cones open up, releasing seeds that are then distributed by wind and gravity.

Examples of this fascinating trait of fire-stimulated seed dispersal include Jack pine (Pinus banksiana, also called grey pine and scrub pine) in the north central and northeastern United States and Table Mountain pine (Pinus pungens, also called hickory pine, prickly pine or mountain pine) that grows in dry, rocky sites in the Appalachian Mountains. Lodgepole pines, ubiquitous across much of the West, are one of the first species to grow after a fire because of their serotinous cones.

As opposed to serotinous cones, which protect enclosed seeds during a fire, the actual seeds of many plants in fire-prone environments need fire, directly or indirectly, to germinate. These plants produce seeds with a tough coating that can lay dormant, awaiting a fire, for several years. Whether it is the intense heat of the fire, exposure to chemicals from smoke or exposure to nutrients in the ground after fire, these seeds depend on fire to break their dormancy. Notable examples of shrubs with this particular fire adaptation include Rhamnaceae (Buckthorn family, including Ceanothus, Coffeeberry, and Redberry) that grow in the California chaparral and other ecosystems of the American West.

A combination of factors has come to limit and alter historic fire regimes. This has had a cascading effect on which species are present in certain ecosystems. Without the right kind of fire regimes, some trees simply can’t reproduce, and overall forest health can be negatively affected. At the same time, unnaturally severe fires can destroy forests, even those that have adapted to fire.

Fortunately, land managers are realizing the value of re-introducing controlled fire in ecosystems where it existed historically, embracing it as a tool rather than fighting it as a threat. That’s a welcome change for the forests, trees and other plants that depend on fire to thrive. 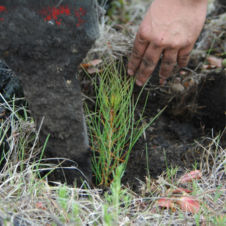