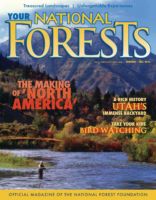 Rising straight up from the flats of the Great Basin Desert, the Wasatch Mountain Range towers over the eastern edge of Salt Lake City.

These craggy peaks are the heart of the 2.1-million-acre Uinta-Wasatch-Cache National Forest (UWC). Stretching north for 90 miles from Salt Lake City to the Utah-Idaho border and south 50 miles from Salt Lake before shifting northeast to the border of Wyoming, the UWC is an immense and awe-inspiring backyard for the 2.1 million residents who live in its shadows.

A Treasured Landscapes site, the UWC is a paradise for outdoor enthusiasts. Eight Scenic Byways snake through the Forest, while seemingly endless mountain biking and hiking trails lure residents and visitors to lung-busting summits. More than 300 sport climbing routes in Logan Canyon alone provide a lifetime of possibility for climbers. Nine Wilderness Areas provide solitude and respite for those seeking escape from the increasingly urban valleys. And of course, the famed canyons of the UWC—Big and Little Cottonwood, Mill Creek, and Parleys—lead to some of the best skiing in the world, drawing countless powder hounds every winter in search of “the best snow on earth.”

Bordering the UWC is the Wasatch Front, an 80-mile stretch of communities that are some of the nation’s fastest growing towns. From Ogden south to Provo, the Wasatch Front houses 80 percent of Utah’s residents. A thriving industry of outdoor gear manufacturers and innovative technology companies have grown alongside traditional agricultural and mining industries. The region has garnered national attention for its quality of life and booming economy, but this growth is jeopardizing the UWC’s capacity to provide the water, recreational opportunities, and physical and cultural amenities that are drawing people and business to the Front.

Forming the western edge of the Rockies and marking the east boundary of the Great Basin Desert, the Wasatch Range is located at an important geographic crossroads where arid plains, rich riparian zones and alpine peaks meet. The lowland valleys and foothills are dominated by sagebrush, rabbitbrush and serviceberry. Conifer forests of Douglas fir, subalpine fir, and Engelmann spruce dominate the upper landscape, with lodgepole pine stands populating the eastern part of the forest. Aspen are the most common deciduous tree in the area, their brilliant autumn gold sweeping across the forest each fall. Cottonwood stands along river corridors and Gambel Oak in the dry canyons and foothills also add to the UWC’s fall color palette.

The UWC is a wildlife haven. Elk, moose, bighorn sheep, mountain goat, white-tailed deer, and mule deer graze across a variety of habitats and ecosystems. Brook trout and cutthroat trout haunt streams and high mountain lakes. Beaver paddle through riparian zones and black bear, mountain lion, and bobcat prowl the forest in search of prey. The area is especially rich with avian life, with neo-tropical birds arriving each year from as far south as Argentina. The Bear River, which is the longest river in the Western Hemisphere that doesn’t flow into an ocean, is one of the most important nesting areas for migrating waterfowl. Over 200 species, from tundra swans to cinnamon teals, arrive each fall, their total numbers exceeding half a million. The watershed is also rich in aquatic life; the Bonneville cutthroat trout, a sensitive species, is a yearround resident of the Bear River.

The human history of the forest stretches back some 12,000 years to the arrival of the early mammoth hunters and the subsequent Fremont civilization. In more recent centuries, the Northwest Shoshoni, Goshute, Ute, and Eastern Shoshone tribes populated the region. The explorers of the Dominguez-Escalante Expedition, on their way from Santa Fe to the Spanish Missions in California, were the first Europeans to pass through the area. Trappers began to arrive in the 1820s in search of the beaver pelts so coveted for fashionable men’s hats. Famous and infamous trappers like Jim Bridger, Kit Carson, and Jedediah Smith all set their traps in the area’s streams during the mountain man heyday.

Even the Uinta-Wasatch-Cache’s name reflects its rich history. “Uinta” is a derivative of the Ute word Yoov-we-teuh meaning “pine tree” or “pine forest” and “Wasatch” is also a Ute word, translated as “low place in the high mountains.” The origins of “Cache” can be traced to the influence of the French fur trappers. The French word for “to hide,” a cache is what trappers called the secret place they would store their pelts until they were traded or sold at the next rendezvous.

By 1846, wagon trails leading to the distant dream of California passed through the canyons and valleys of the region. Newly arriving Mormon settlers depended on the land for everything from livestock grazing to building supplies as they developed their settlements, and later, their cities. Today you can still visit the historic quarries on the forest that provided the stone for the famous Latter Day Saints temple in Salt Lake City. In the early 1860s, the legendary Pony Express passed through the Salt Lake Valley en route to California. Hikes along National Historic Trails follow the routes of the swift Pony Express riders and hearty California pioneers and Mormon settlers, providing a unique opportunity to retrace their steps.

Twin mining and railroad booms impacted the UWC in the mid-19th century. By the late 1860s and early 1870s a well-developed system of smelters were processing silver, lead and zinc throughout the region. At the same time, timber was being harvested across the landscape on a large scale by loggers known as “tie hackers” for use in the miles of new railroad being laid across the West. In 1869, when the transcontinental railroad was completed at Promontory Summit, the last ties laid were made of wood from the UWC. Both booms brought diversity to the area, with immigrants from Asia, Mexico, and all corners of Europe arriving in search of new opportunities.

Today, the rich recreational resources of UWC are drawing a new wave of settlers to the valleys and towns that dot the Wasatch Front. But this influx of newcomers comes with its own set of problems. Eighty percent of the watershed that slacks Salt Lake City’s thirst is contained within the UWC. City officials and the Forest Service have co-managed the Forest’s water supplies ever since Gifford Pinchot visited Salt Lake City in 1905 to stress the importance of managing the Forest for its water resources. Recreational pressures, a growing population, and a changing climate have stressed the UWC’s ability to provide this invaluable resource and officials are now trying to plan for the next one hundred years.

The NFF’s Treasured Landscapes conservation campaign is addressing these issues through proactive restoration and careful planning that will bolster the Forest’s capacity to provide both unparalleled recreational opportunities and clean water to the area’s growing population. We are leading a diverse collaborative called the Wasatch Watershed Legacy Partnership, made up of ski resorts, community organizations, industry, and Federal and State agencies that are tackling these resource concerns. Our restoration priorities include addressing water quality issues, improving wildlife and fisheries habitat, removing invasive weeds, and building sustainable recreation infrastructure.

Our success in meeting these challenges rests in the spirit of collaboration and community that permeates this region. The close-knit communities of the Wasatch Front echo the historical ties that settlers established when they first arrived to this arid and unforgiving landscape. New recreational opportunities have given rise to social communities where skiers, bikers and climbers meet for first tracks or group rides. Our efforts are grounded in working with these communities, both physical and social, to create opportunities and solutions for ensuring that the UWC can continue to provide the natural and cultural resources to the Wasatch Front for the coming generations.