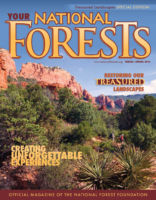 The Midwest is, overall, a flat place. Mountain peaks do not reach into the heavens and rivers have not carved majestic valleys through the earth. In the flatness however, a beauty unlike anything else can be found. The restoration efforts at Midewin National Tallgrass Prairie in northeastern Illinois aim to bring that beauty back with every non-native plant pulled and with each workday volunteered.

I was born and raised in the “thumb” of lower Michigan. Looking out across the landscape, the most significant features were the grain silos towering on the horizon. In the summer, I watched storms roar across the open fields and in the winter I witnessed the world transform into a muffled white wonderland. Due to strong agricultural ties throughout the Midwest, people, including my family, not only work with the land, they appreciate and respect the land. The soil, dirt and its potential are as constant a topic as the weather.

But what was it before? Before my ancestors removed trees and planted acres upon acres of crops, what did the land look like? Iconic landscapes around the country linger for future generations: the sharp peaks of western mountains, powerful rivers snaking through the land, and canyons that are grand in every sense. But for more than 65 million residents of the Midwest, the original landscape, short and tallgrass prairie, has almost been completely eradicated. Tallgrass prairies are as much a myth as Paul Bunyan or Johnny Appleseed.

The hardy people of the Midwest withstand erratic weather and brutal winters that never have a solid stop date. But in the dark months and tough times, neighbors and communities bind together. The sense of community runs just as deep through Midwesterners as the connection with the land. Community is the pulse of the people. Consider historic barn raisings: a farm needed a barn and every nearby farmer and family lent a hand for the day. Today, the strength of community still stands; people come together for things bigger than themselves. Midewin National Tallgrass Prairie is one of those things.

“[Midewin] probably would not have happened without people coming together.”

One of the few remaining tracts of tallgrass prairie—not only in Illinois, but in the Midwest—Midewin National Tallgrass Prairie offers residents and visitors the opportunity to appreciate what they have and cherish what once was. As a Treasured Landscapes site, Midewin is a priority restoration project for the National Forest Foundation. The NFF’s restoration strategies include removing invasive species, planting native species, and restoring streams and wetlands. Community engagement, education and volunteerism are incorporated as crucial elements of the restoration plan and are key to the success of Midewin’s renewed life as a tallgrass prairie.

Prairies originally stretched across most of the land acquired in the Louisiana Purchase of 1803 and most of Illinois Explorers could travel days in tall grasses before seeing landscape of any other kind. As exploration pushed further west, the first settlers came to the Midwest from the Ohio Valley. When the construction of the Erie Canal finished in 1825, the Upper Midwest opened for easier access and settlement. Some writers, romanticizing the frontier, described the covered wagons that traveled through the seas of tallgrass prairies as prairie schooners, alluding to their similarities to ships sailing at sea.

New settlers quickly needed a means to feed themselves and later, the growing nation. Hailing from forested states, farmers reveled in Illinois’ acres of treeless prairie. To cultivate the land, the first settlers used wooden plows, originally suited to the loose soils of the eastern forests. In the dense soil of the Midwest however, the plows weren’t able to cut through the ground. In 1837 an Illinois blacksmith by the name of John Deere developed a steel moldboard plow that was strong enough to cut through the soil and plant roots. In the wake of his invention, after a few generations the Midwest became one of the highest producing agricultural areas in the country, nearly wiping out native tallgrass prairies in the process.

While the Midwest’s population boomed and prairies turned to croplands, the nearly 20,000 acres of land known today as Midewin National Tallgrass Prairie housed the Joliet Arsenal. The vast complex of factories, buildings, roads, railroads and other facilities was used by the U.S. Army from 1940 until 1996. Although military infrastructure occupied most of the land, large swaths of the Joliet Arsenal became accidental open space, providing a rare open view amidst ever-growing Chicago suburbs.

After heavy use throughout the mid-20th century, the U.S. Army released the land in the early 1990s, triggering an onslaught of questions from the public.

“Everyone had an idea of what to do with the space. There were an unbelievable number of ideas about the land,” explains Heinrich, who lives just 2 miles from the property and had come to enjoy seeing the nearby open space. “I would have hated to see it turn into industry.”

Heinrich, along with representatives of more than 20 different organizations, had the opportunity to serve on a commission created by Former U.S. Rep. George Sangmeister. As Heinrich says, they represented “groups that typically didn’t come together,” but they expressed a shared passion for open space.

Marianne Hahn, past president of the Midewin Tallgrass Prairie Alliance and editor of the “Prairie Telegraph” newsletter says, “We wanted as broad of a representation as we could get.” As the commission lobbied for support they were fortunate to not only receive public backing, but they saw very little negative opposition, which is “rare and unusual that [the project] was not opposed by any significant group,” explains Heinrich.

The commission first lobbied to transfer management of the Joliet Arsenal from the Army to the U.S. Fish and Wildlife Service (USFWS). After consideration however, the USFWS decided the land would not be a good fit for their priorities. Despite this apparent setback to conserving the prairie, the commission and local communities launched a grassroots campaign to advocate for Midewin’s protection. As a result of their efforts, in 1996 the land officially transferred from the U.S. Army to the U.S. Department of Agriculture Forest Service, establishing Midewin National Tallgrass Prairie.

Despite being well-worn from past uses, Midewin represents a once-in-a-lifetime opportunity to reassemble the full array of wildlife and wildflowers once typical of tallgrass prairies. As the prairie continues to regrow, the NFF, local communities and partner organizations work with the Forest Service to remove Army infrastructure, eradicate invasive species, plant native seeds and restore the meandering streams and wetlands that once graced the prairie. Throughout the entire process, collaboration has remained constant. “One of the key words is partnerships,” says Hahn.

From community groups to foundations and corporations, Midewin inspires the support necessary to bring back what was once lost. “It’s a missing link that needs to be closed. That is what drives us and other volunteers,” says Heinrich.

Just as Midwesterners may seem quiet and unassuming, the towering grasses that give tallgrass prairies their name comprise more than meets the eye. Dwarfing even the tallest visitor, the grasses grow to a height of 4-6 feet, occasionally rising 8 or 9 feet into the air. As impressive as the stems may ascend, it’s the roots that deserve the credit. Extensive root systems, often longer

than the stems above ground, provide the strength to last through the winter and return in the spring.

As the old roots of the grasses die, they decompose into the soil, supplying rich organic nutrients back to the grasses and other plants. Amidst the tall grasses of Midewin, nearly 50 different species of wildflowers bloom from May to October, splashing the landscape with color.

Midewin National Tallgrass Prairie is also home to numerous bird species. In 1982 biologists from the Illinois Department of Natural Resources attended a meeting at the then Joliet Arsenal and noticed several upland sandpipers sitting on utility poles. Listed as an endangered species in Illinois, the upland sandpiper winters in South America but breeds in open grasslands and fields throughout central North America. Realizing the incredible occurrence, biologists began limited surveys of the upland sandpipers at the Arsenal in 1983, showing numbers that suggested the Midewin sandpipers were the largest population in the state. After expanded surveys in 1985, it was clear to biologists that the Joliet Arsenal was one of the best habitats in Illinois—and perhaps the Midwest—for this endangered bird.

As the land at Midewin has changed hands, the avian studies have continued for more than 20 years, chronicling the bird populations throughout the prairie. Under Army ownership, the grasslands were managed for grazing, which was suitable habitat for upland sandpipers, grasshopper sparrows and loggerhead shrikes. However, Henslow’s sparrows and sedge wrens were rare due to the lack of tall grasses. As restoration efforts continue today, the Forest Service hopes to improve habitat for upland sandpipers and other grassland birds preferring short grasses, as well as birds preferring tall grasses. Bobolinks, Henslow’s and grasshopper sparrow populations are all increasing thanks to the resurgence of native grasses over the last 15 years.

A Treasure for All

Have you ever stood in a field of grasses towering over your head? Have you felt small in a wide open sea of grass? Soon the majestic prairie will once again provide a sense of awe for residents and visitors alike. Less than an hour away from Chicago, Midewin National Tallgrass Prairie is an ideal location for urban education and interpretation programs. Midewin offers educators the chance to take their lessons beyond the walls of a classroom and immerse their students in the “Prairie State” of Illinois. Midewin is “a place where you can see native Illinois just about as far as you can see,” says Hahn.

Modern-day travelers driving across the country now have the opportunity to explore the landscape our forefathers passed through. At the crossroads of the country, Midewin gives visitors from the Midwest and the nation a chance to explore the prairie on foot, bike and horse. Visitors can also stop at the Midewin Welcome Center and learn about the rich cultural and natural history of Midewin.

The Midwest feeds the nation, can’t it also amaze us? Prairies have long been the forgotten places of our people. But it is on the prairies—the wide open spaces of long ago—that we can take a moment and see the big picture. A single person may plant a plot of grasses, but only when the community unites, can the prairie become what it once was and should be for generations to come.