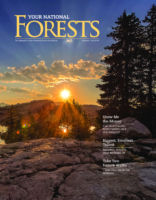 Across the nation, more than 193 million acres of National Forests are all yours to explore. Whether you’re kayaking among icebergs, skiing one of 120-plus ski resorts, exploring saturated rainforests or even finding the perfect place to watch a total solar eclipse, you’re sure to find something superlative in each of our 174 National Forests and Grasslands.

Some, like the Inyo National Forest, literally stand above the rest, while others like the Tongass offer perspective-shifting scale.

From Alaska to Puerto Rico and California to Maine, we’ve pulled together a list of the wettest, wildest, biggest and “most-est” National Forests America has to offer.

The Biggest (and the smallest)

The Tongass National Forest reigns supreme as the biggest National Forest in the country. That’s probably not surprising given that it’s located in the biggest state, Alaska. Glaciated coastlines, the Inside Passage and an abundance of wildlife including bears, eagles and whales define much of the Tongass. At 17 million acres, the Tongass is two million acres larger than the state of West Virginia.

Features like the 13-mile-long Mendenhall Glacier and the world’s largest intact temperate rainforest add to the Tongass’ big feel. If you like big adventures alongside huge views and epic acreage, the Tongass offers kayaking iceberg-filled fjords, month-long backpacking trips, extended expeditions on shimmering ice, and more.

At the other side of the scale, the nation’s smallest National Forest, eastern Alabama’s Tuskegee, encompasses just 11,000 acres. But don’t let its diminutive size deceive you, the Tuskegee is home to the Bartram National Recreation Trail, miles of mountain biking trails, wildlife viewing sites, a shooting range, a fire tower, and loads of historic sites. Even though it could fit into the Tongass more than 1,500 times, the Tuskegee is proof that good things come in small packages

Up, up and away

While Colorado has the country’s largest concentration of “fourteeners,” peaks 14,000 feet or higher, Mt. Whitney on California’s Inyo National Forest is the tallest of the tall. At approximately 14,500 feet above sea level, Mt. Whitney is the highest summit in the lower 48 and a jutting landmark of adventure in the Sierra Nevada Mountains.

It’s also the southern terminus of the drool-inducing John Muir Trail and a worthy side-trip along the 2,650-mile Pacific Crest Trail. The 360-degree views atop Whitney aren’t just reserved for backpackers; every day of the snow-free season (July to late-September), permitted day hikers tackle the 22-mile summit trail that includes a thigh-busting 6,000-plus feet of elevation gain.

Numerous National Forests in Washington, Idaho and Montana abut the 49th parallel. Washington itself has three National Forests adjacent the Canadian frontier: the Mount Baker-Snoqualmie, Okanogan-Wenatchee and Colville National Forests. August is arguably the best time to visit: snow has melted, rain is less likely and alpine lakes are primed for quick dips and cannonballs.

Those who prefer southern latitudes should head to Florida’s Ocala National Forest. This southernmost forest is rich with wildlife, hiking trails and first-magnitude springs, like the

Extending into Maine, the easternmost National Forest rests primarily in New Hampshire. More than 1,200 miles of trails connect the varied terrain that define the White Mountain National Forest, including hardwood forests and clear mountain lakes, as well as 148,000 acres of designated wilderness. While, there’s no official contest, the White Mountain would win the “most likely to blow your hat off” award thanks to the summit of Mount Washington with its record-setting wind gusts that top 200 miles per hour.

While the Rogue River-Siskiyou National Forest is a smidge farther west than other forests in the lower 48, the Siuslaw is one of two contiguous forests that touch the Pacific Ocean (California's Los Padres is the other). Home to sand dunes, historic lighthouses and challenging headland trails, the Siuslaw also boasts the Cape Perpetua Scenic Area. A prominent stop on the Pacific Coast Scenic Byway and named by Captain James Cook in 1778, Cape Perpetua provides the highest viewpoint on the Oregon coast accessible by car.

Using the powers provided by the Forest Reserve Act of 1891, President Benjamin Harrison established the Yellowstone Park Timberland Reserve, which served as a buffer for the newly appointed national park. This “reserve” of land started a chain reaction in history; over time, Presidents created a slew of other timber reserves that would become our National Forests.

The Yellowstone Park Timberland Reserve is now known as the Shoshone National Forest. Much like they were in 1891, all 2.4 million acres of the Shoshone are an integral part of the roughly 15-million-acre Greater Yellowstone Ecosystem. Along with the largest free-roaming, wild bison herds in America, the Shoshone helps support over 335 species of wildlife.

Created in 1908, the Ocala National Forest is the oldest forest in the East. Others soon followed because of the Weeks Act, which created a way for the federal government to purchase private lands for natural resource development and protection.

Congress passed the Weeks Act in 1911 because of issues around watershed degradation, flood control and wildfire management. The first tract of land purchased under the Weeks Act is now part of the Pisgah National Forest in North Carolina. Other iconic eastern Forests, including Virginia’s George Washington, New Hampshire’s White Mountain and

On the rugged Olympic Peninsula of western Washington, the Olympic National Forest is nearly synonymous with rainfall. The Olympic contains the aptly named Quinault Rain Forest, and the area receives an olympic-swimming-pool quantity of water each year. Twelve to fourteen feet of annual rain, plus considerable snowmelt from the surrounding Olympic peaks, results in a lush and vibrant environment boasting more shades of green than Ireland.

Another contender for rainiest forest, the El Yunque National Forest in Puerto Rico, is certainly the most tropical. Though it is one of the smallest at only 29,000 acres, El Yunque is the only tropical rainforest in the National Forest System. All that rain makes for a diverse place; many of the incredible animal and plant species supported by El Yunque are found nowhere else in the world.

Hardest to pack for

Stretching from the rim of the Great Basin to the colorful Colorado River canyons in southern Utah, the Dixie National Forest presents some of the sharpest climate extremes found in the country. At lower elevations near St. George, Utah, temperatures easily exceed 100°F in summer months, while atop the 10,000-foot high plateaus that define much of Dixie National Forest, winter lows often reach minus 30°F.

Go jump in a lake

A whopping 700 square miles of the Superior National Forest in northeast Minnesota are surface water, including much of the Boundary Waters Canoe Area

Wilderness. The only amenities that rival the number of lakes within the Superior are the 2,000 designated campsites that offer solitude and glimpses of the aurora borealis throughout the year.

Most likely to find a chairlift

Hosting industry giants like Aspen, Vail, and Breckenridge (and a total of 12 ski resorts across its 2.3-million acres), Colorado’s White River National Forest is arguably the best National Forest for skiing. It’s also one of the most visited in the country. Winter isn’t the only draw, the chairlifts within the White River operate in warmer months for downhill mountain biking and scenic alpine rides.

Most likely to mispronounce

With a name that’s easy to bungle, the Monongahela National Forest of West Virginia is within a day’s drive of about half the nation’s population. While many have their preferred way to pronounce this rich ecological region of mountains and rivers, the correct pronunciation (Muhnahn-guh-HEE-luh) reflects the native tongue of the area’s original inhabitants. After you master “Monongahela,” you’re ready for other tongue twisters like the Ouachita (Arkansas and Oklahoma), the Chequamegon-Nicolet (Wisconsin), and the Okanogan-Wenatchee (Washington)!

Most likely to see the next total solar eclipse

If you missed 2018’s total solar eclipse, don’t fret too much. Several National Forests in the middle of the country are in the path of the next one, which will occur on April 8th, 2024. Some of the best viewing sites are on the Shawnee National Forest in Illinois; that forest’s Garden of the Gods Recreation Area is a particularly scenic spot to see the eclipse with plenty of boulders to lean on as you look skyward. But don’t wait until 2024 to book a visit to the Shawnee, it’s worth visiting any time of the year.

Whether it’s the highest, the oldest or the one that’s closest to you, all 174 National Forests and Grasslands merit exploration. No matter the superlative, National Forests across the nation offer fun adventures, diverse environments, historical treasures and new things to discover, leaving the last category for you to fill: the National Forest you’re most likely to visit next.

Brad Lane is a Missoula, Montana-based author and adventurer. This is his first piece for Your National Forests magazine. Reach him through his website: BradLaneWriting.com.