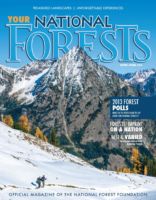 Resorts, ever-hungry for additional revenue, had long desired that Congress and the agency update the permitting process so they could offer summertime activities that would fill hotel rooms, restaurants and bars.

The bill passed both the Senate and the House in a bipartisan fashion, one of few bills in the past several years to get such broad support. Forest Service Chief Tom Tidwell commented, “The National Forests have always been some of America’s greatest playgrounds. It is exciting that our ski areas will now be able to offer more recreational opportunities and economic benefits.”

Americans love outdoor recreation as recent studies clearly illustrate. According to the Outdoor Industry Association, we spend nearly $650 billion on our favorite outdoors sports and adventures each year—more than we spend on utilities, gasoline, motor vehicles, or pharmaceuticals. From rock climbing to stand-up paddle boarding, a new wave of outdoor sports is drawing hundreds of millions to our public lands. Few outdoor sports, however, have attracted such a devoted following as downhill skiing and snowboarding. While the industry is not as strong as it once was, it remains one of the primary reasons Americans head outside to play in the winter. And because so much skiing takes place on National Forests, it has long played a critical role in introducing Americans to these amazing public lands.

Skiing in America is intrinsically and historically tied to our National Forests. The sport’s introduction in America predates the Forest Service’s creation by a couple of decades, and its impact on our forests and surrounding communities is undeniable. While recent Forest Service Visitor Use Monitoring Surveys show that hiking and walking are the most common primary reasons for visiting a National Forest (17%), downhill skiing is a close second (14%). The agency touts the roughly 25 million visits a year that skiers make to our National Forests—just under half of the 57 million visits made to all ski areas in 2012.

These National Forest skiers pump three billion dollars into the economy each winter and sustain 65,000 full or part-time jobs.

One hundred and twenty two ski resorts operate on National Forests, primarily located in the West. The list includes some of the most iconic resorts in the country like Vail, Aspen, Snowbird, and Mammoth as well as some Mom and Pop areas. Years of industry consolidation have concentrated ownership of many American ski resorts to a handful of powerful companies, which have to navigate the whims of winter weather, a tough business climate, fierce competition, and significant pushback from environmentalists to stay profitable each season.

Skiing is an ancient pastime—or at least an ancient way of navigating through winter. As a pastime, it’s really only a couple hundred of years old. Although evidence of skiing dates back to 2000 BC, recreational skiing has its roots in Scandinavia, where both technique and equipment were “perfected” during the 1800s.

Scandinavians introduced it to the U.S., initially through Nordic skiing and ski jumping in the Midwest. As the sport took root there, gold rush era miners in California and the Rockies began racing each other down the snowy mountains that surrounded their makeshift communities. Using closely guarded, secret recipes for ski-wax, these fearless miners reached speeds of 60 mph or more in their pursuit of mine camp glory.

Ski resorts began springing up across the country in the 1910s and 1920s. According to the National Ski Areas Association (NSAA), by 1930 five ski resorts operated from California to Massachusetts. The next decade saw fifty resorts open, including Sun Valley, Alta, and Stowe. Over the next three decades, the ski industry exploded, 82 resorts opened from 1940-1960, with an additional 107 opening in the 1960s. The 1970s (47) and 1980s (23) saw the last push of new resorts, but the number has plateaued and even declined slightly. In the last two decades, fewer than twodozen resorts have opened.

Significant backlash from the environmental community has exacerbated the industry’s struggle in the last couple of decades. While ski resorts on National Forests have a combined footprint of about 188,000 acres, or about 1/10th of a percent of the National Forest System, the consequences of concentrating so many visitors in relatively small areas are real and significant. Habitat fragmentation, water use, waste disposal, greenhouse gas pollution, and sprawling development are just some of the issues raised by conservationists over the years. This is especially true in places like the White River National Forest in Colorado, which contains twelve ski resorts on National Forests, including world-renowned Vail and Aspen. Beginning in the 1990s, high-profile arsons and other civil disobedience brought national attention to the industry’s general operations and expansion plans.

Resorts and the NSAA have responded by developing the Sustainable Slopes Initiative, implementing water saving measures,providing public transportation to the ski hill, and more. Voluntary programs like the NSAA-led “Climate Challenge Program” help resorts reduce their greenhouse gas emissions. According to the NSAA’s president, Michael Berry, “Ski areas are proactive on the issue of climate change. They take steps in their own operations to reduce their carbon emissions and recognize the benefits of uniting with other business interests in getting attention on this issue in Washington.” Many resorts have also partnered with groups to create innovative programs, like the NFF’s Ski Conservation Fund, that restore public lands surrounding many ski resorts. Most agree that these initiatives have made a real difference, but the industry still faces criticism, and extensive litigation, especially when it wants to expand operations on public lands.

Before the 2011 Act passed, ski area operations were governed by the National Forest Ski Area Permit Act. This 1986 law updated the confusing and cumbersome manner in which the

agency permitted resorts since the 1940s, and helped slow the decline in new resort development (Congress generally supported ski area expansion and new resort development to promote public health and increase revenues from public lands). Ultimately market forces and other factors like increasing environmental awareness affected the industry’s ability and desire to expand, despite the 1986 law.

The 2011 Act expands the uses ski areas can offer to guests. Prior to 2011, most resort permits allowed winter sports only—skiing, snowboarding, snowshoeing, cross-country skiing, and their cousins—sledding, ice-skating and the like.

Overall, the ski industry is stagnant. Baby boomers who drove the sport’s growth in the 1960s and 70s are visiting less often. Snowboarding’s popularity is waning, and young people aren’t hitting the slopes as much as they used to. Hundred-dollar tickets, transportation difficulties, shifting leisure pursuits, and a changing climate are often cited as key factors. In the 2012-2013 season, the NSAA recorded 56.9 million skier and snowboarder visits to U.S resorts—three million less than 2006/2007’s peak of 60 million. According to the NSAA, the total number of resorts operating in the U.S. has also dropped—from 546 in 1992 to 477 in 2012.

The industry is responding with host of programs aimed at getting young kids on skis and boards. In Colorado, a state with perhaps the most to lose from a declining ski industry, all fifth graders can ski for free if enrolled in a special program. While this deal pulls about 14,000 young Coloradans to the slopes each year (about 20% of all fifth graders in the state), a joint program that provides discounts to sixth graders retains only about 30% of the participants the following year. This spells trouble not only for Colorado, which relies heavily on skiing’s economic benefits, but also for developing a new generation of stewards for our public lands.

It’s far too early to tell if the new Act will help resorts maintain profitability. The Forest Service projects that expanded activities will bring an additional 600,000 people to resorts, adding 600 or more full and part-time jobs and infusing $40 million into local communities. The agency recently completed a public comment period that solicited input on what types of activities would be permitted under the new law. Zip-lines, mountain bike trails, and disc golf are new activities resorts may offer, while swimming pools, tennis courts, and traditional golf courses are not on the list. This law only covers the public lands on which resorts operate, not the private land that often sits at the base of many resorts.

Whatever the industry’s outlook, whatever your views on the sustainability of ski resorts, and regardless of whether you’re a skier, a snowboarder, or an in-the-lodge-hot-chocolate-sipper, there is no denying that winter sports have introduced millions to the National Forest System.

A CONNECTION WORTH EXPANDING

Perhaps more than any other activity, skiing and snowboarding have lured the masses to the forested slopes that make up much of our public lands estate. For many of those skiers and boarders, the view at the top of a ski resort—sprawling ridgelines and snowcapped peaks that extend in almost every direction—is their first and often, most powerful, connection to the incredible beauty and vastness of our National Forest System. And those connections are well worth expanding.